This photograph was taken looking south, down Brooklyn Street, in 1889, from just above 121 Brooklyn. The bridge in the foreground crosses Wheeler Brook, which now flows through a culvert under the street.

Most of the people in the foreground are probably members of the Ripley and Feige families, which occupied 115 Brooklyn and 121 Brooklyn, respectively (the first two houses visible on the right side of the street). Henry Ripley (age 51) and his son William (age 23) were both butchers, and the cart in the center of the picture seems to be advertising their business, though it’s uncertain whether the man standing beside it is Henry or William — Henry passed away on June 7th, 1889.

The pram on the right side of the image is probably occupied by the newest generation of the Ripley family: William’s daughter, Carrie Bell Ripley, who would have been between one and two years old. Of the two women beside the pram, one of them is probably her mother, Lulu May Ripley (née Champney), age 23. The other woman is probably one of her grandmothers, both of whom may have been living in the house. William’s mother, Caroline, lived with him for several years before converting the stable behind the house into a separate home (109 Brooklyn) in the late 1890s.

Lulu’s parents, Fred and Almira Champney, also moved in with the couple sometime between 1887 and 1890, so they may have been present at the time of the photograph. Fred was a Civil War veteran with a colorful history — a staunch Unionist, he spent several years in the deep South, where he married Almira (who grew up in Georgia, in a slave-owning household). At the beginning of the Civil War, he was arrested as a traitor and forced to flee northward, leaving Almira behind. He then served as the chief engineer on a Union gunboat and was present for the capture of New Orleans in 1862. Almira eventually rejoined him in North Adams following the war.

The woman and child standing on the sidewalk between the pram and the cart might be Grace Feige (age 35) and her son Edgar (age 8), who lived in 121 Brooklyn. The Feige family had experienced considerable tragedy the year before — Grace’s husband Charles died of typhoid fever on January 12th, 1888, while Grace was pregnant with their sixth child. Their daughter Grace Augusta was born in March, but died that August. This photograph, taken in 1889, captures the family in a time of transition. Charles had owned a bottling company located on Marshall Street that sold beer, soda, and mineral water. This operation passed into new hands following his death, and became Chrystal Bottling Works. In 1890, Grace married Charles’s former business partner, John Barnes, who partnered with her oldest son, William Ernest Feige, to open a new bottling works on the adjacent lot to the north (133 Brooklyn). Feige & Barnes operated until the late 1890s, when financial troubles led to the sale of both properties.

The remaining people visible in the street are not identifiable from the photograph alone. However, we do have some information about the residents of the surrounding houses. 110, 120, and 126 Brooklyn were rented out to an assortment of tenants. 108 Brooklyn was occupied by John Loomis, who operated a restaurant on Main Street, along with his wife Belle, daughters Minnie and Gertrude, and mother Edna Loomis (née Burdick). 101 Brooklyn was occupied Duncan Harriman, a shoe cutter, and his family. The occupants of 107 Brooklyn are unknown. 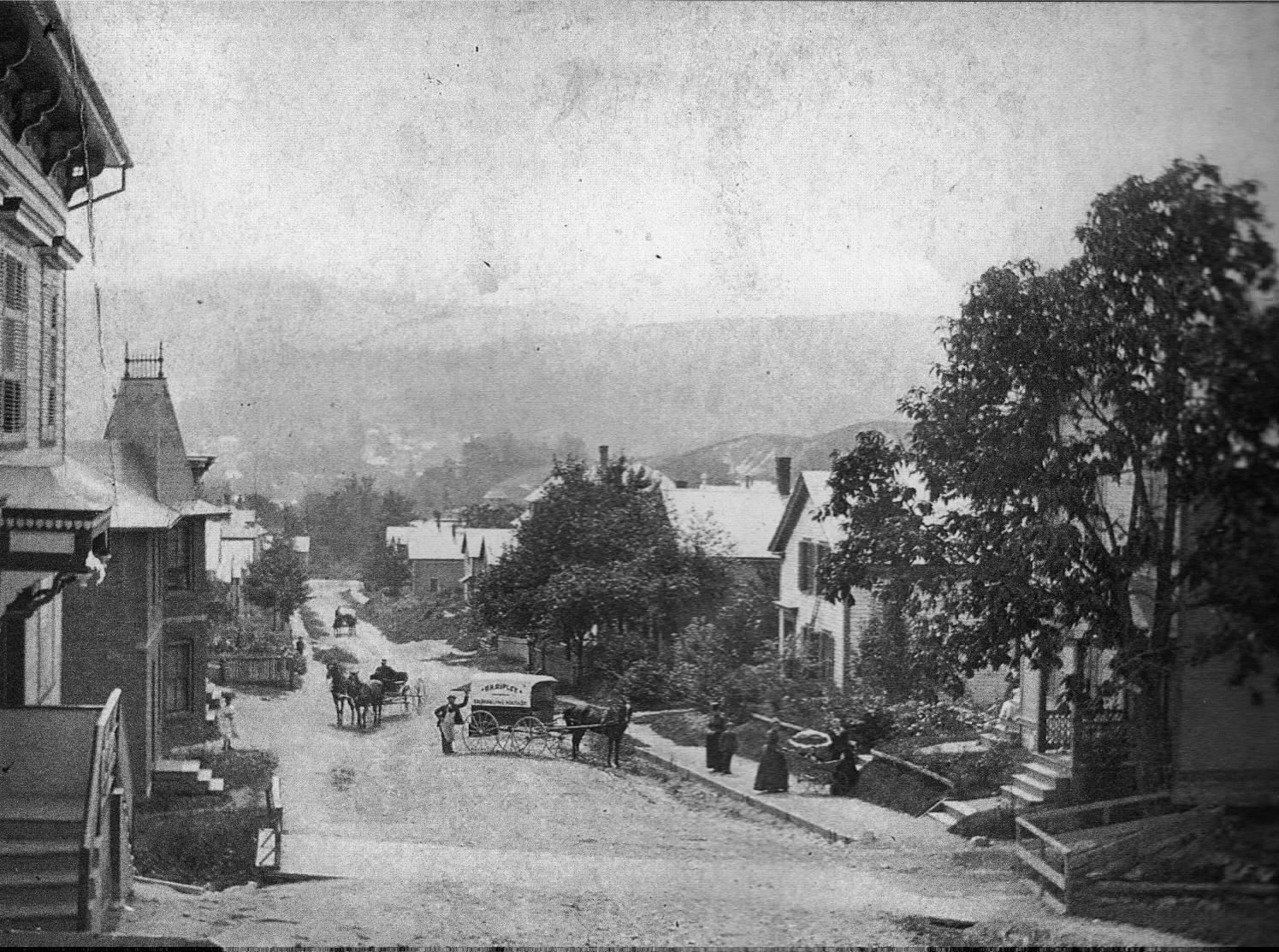 BSN meets on Wednesday evenings at 6:30, once or twice a month.
Please RSVP for date and location of the next meeting.

Where is Brooklyn Street?